A Cult of One: Misunderstanding the Doctrine of Sola Scriptura 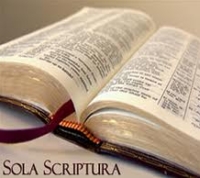 The Protestant Reformation ushered in a famous principle known as “Sola Scriptura” (Scripture Alone). Additionally, another prominent doctrine which was then brought forth is often known as “the universal priesthood of the believer“.

Many, many, people in the years since interpreted those two doctrines taken-together to mean that each person interprets the bible for himself (and by himself). Unfortunately, this has had the tendency to create novel doctrines over the years, and yes, a proliferation of cults.

But, equally important (perhaps more so) is the point that while each one may understand the Bible directly, nevertheless doctrine-forming “interpretation” is a community project. That is, whereas in the medieval Church the laity was spoon-fed whatever the clergy decided to give them; in the “reformation period” the pattern was the clergy and the “laity” interpret the Bible together.

Thus, gifted teachers of the body of Christ are held responsible by a studying Church. Consequently, What you then have with these two principles (and others) is mutual accountability as the Church works through theological and practical disputes which do inevitably arise.

When a person (or a small group) quits this communal dialogue with the universal Church they tend to double-down on their novel doctrine, because all broader Church correction is lost, and voila!, you have a cult (or something like it).

There are many Christian people who would bristle at the thought of “starting their own cult” (they would say, ‘only follow Jesus’ — and rightly so). Nevertheless, they insist they do not need to read books, commentaries,, confessions and creeds. They think that “Sola Scriptura” means they only need the Bible, and “the universal priesthood of the believer” means they need no counsel from others (save the “Holy Spirit” — they say).

But, not every idea we get is a spirit-illumined idea. Many spring forth from human imagination. And, a person cut off from dialogue with the universal Church of Jesus Christ, and with only their ownself for counsel, is effectively a “cult of one”.

This post is republished from the Reforming Evangelicals blog of Charles E. Harris. Used by Permission.