Excellent Quotes from Sola Scriptura: The Protestant Position on the Bible 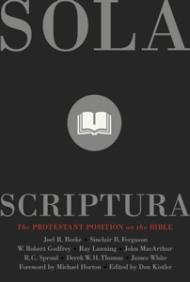 Sola Scriptura , the formal principle of the Protestant Reformation, is essential to genuine Christianity, for it declares that the Bible is the inspired word of God, the church’s only rule of faith and practice. Yet this doctrine is under assault today as never before, both from outside and and inside the church.

I’ve had this book in my library for quite some time. Just a few weeks ago I picked it up, not knowing what to expect, and was blown away by the Foreward and Introduction. Below are a few quotes to whet your appetite for this amazing book!

From the Foreword written by Michael Horton:

“We fallen sinners are creative folk. We do not appreciate being told from above what to believe and how to conduct ourselves in this life. The Frank Sinatra phrase “I did it my way” still expresses the sentiment of the rebellious human heart.”

“As it was in the days of the judges, the kings, and the prophets, so it is in our day: there is a famine in the land for God’s Word. False prophets abound, promising peace when there is no peace, as the pastor is replaced with the manager-therapist-coach-entertainer.”

“In our day, we also find ourselves immersed in a visual culture where words in general are both unimportant and viewed with a growing cynicism.”

“The transcendent realities of God’s character, His commands, and His saving work are not available to the philosopher, scientist, artist, or therapist. Secular wisdom may lead us to the truth about the revolution of planets, but it cannot explain the nature of God, man, sin and redemption. It cannot lead us to the truth about how we are to be saved from God’s wrath, for it refuses to believe that divine wrath is a reality.”

“The message of the cross assumes the terror of the law, divine wrath toward sinners (and not just their sins), and the need for a substitutionary sacrifice to assuage divine justice. It assumes that the greatest problem facing humanity is original and actual sin – personal rebellion against a holy God – not stress, low self-esteem, and a failure to realize one’s full potential.”

The following are from the Preface written by R. Bruce Bickel

“If God in all His sovereign majesty did not choose to reveal Himself to mankind, there would be no true knowledge of Him or the possibility of a true relationship with Him.”

“All human efforts to get to know God by man-created means lead invariably to false religions or mysticisms. Consequently, the primary question governing our relationship with God is the question of submission – either to His revelation or to our imagination. The former requires that we rely upon a divine influence over our minds, which must be submissive to the truth of the Revealer. The latter depends upon the amassing of propositions, theses, and traditions: a mixture of philosophy, psychology, and theology – a man-made ‘philo-psycho-theology.'”

“It is an example of God’s merciful kindness to fallen humanity that He has willed that all of the knowledge we need for a relationship with Him, and for correct worship of Him, would be provided by Him.”

“Too often what passes for unity is really compromise. It is better to be divided by truth than united in error.”

“In an age where the absolute authority of Scripture has been jettisoned for the sake of agreement at the expense of doctrinal distinctives, we must be reminded that for real unity to exist among Christians, it must be based on the unadulterated truth of the gospel of Jesus Christ contained in the Scripture alone.”

“A conscience that is bound by the Word of God is a force that no nation, system, or age can withstand.”

Quotes taken from Sola Scriptura: The Protestant Position on the Bible.