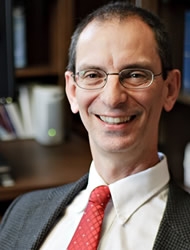 If Wesleyans and Calvimsts concur on the human condition, wherein do they differ? One major place that Wesleyans break with Calvinists is through their doctrine of prevenient grace. Elton Hendricks says that this doctrine ”played a more important role in Wesley’s theological thought than in that of any other Protestant theologian.”[14]  Williams affirms that it ”has very great significance in his theology.”[15]  Even though Calvinists and Arminians hold much in common, H. Ray Dunning rightly says that ”the truth that holds them but a hair’s breadth apart at the point of the watershed is the doctrine of prevenient grace.”[16]  The differences between Calvinists and Arminians on this point should not be minimized. William Ragsdale Cannon is correct in saying that ”though Wesleyanism and Calvinism come in this instance so close together, they are in reality worlds apart.”[17]  How crucial is prevenient grace to the Wesleyan system? Wesleyans themselves seem to concur that their theology hinges on the doctrine. Robert E. Chiles says that ”without it, the Calvinist logic is irrefutable.”[18]  Williams asserts that Wesley’s theology of prevenient grace ”broke the chain of logical necessity by which the Calvinist doctrine of predestination seems to flow from the doctrine of original sin.”[19]  It seems fair to conclude that if prevenient grace is not taught in Scripture, then the credibility of Wesleyan theology is seriously undermined.

Before probing to see whether Scripture teaches prevenient grace, it is necessary to explore what Wesleyans mean by the term. We need to recall that Wesley himself was not a systematic theologian but a pastoral theologian who developed his theology in the course of his ministry. Thus, no systematic treatment of the theme of prevenient grace is found in his writings.[20]  In Wesleyan theology there are various conceptions of prevenient grace that we do not need to specify here since, as we shall see, there is common ground within the various positions on the issue that concerns us.[21]

In some respects Wesleyans use the term prevenient grace in a way that matches with the Calvinist term common grace.[22]  The conscience, according to Wesley, is to be ascribed to prevenient grace.[23]  It is not to be understood as a natural gift but is supernaturally given by God.[24]  In addition, some moral excellence and virtue in the world exists even among those who are unregenerate.[25]  Prevenient grace is responsible for the goodness that is present to some extent in every society, even in cultures that are largely non-Christian.[26]  We are not surprised to learn, then, that the relationship between prevenient grace and natural theology has been explored by some, with a close connection being suggested.[27]

The Wesleyan understanding of prevenient grace differs from the Calvinistic conception of common grace in one important area. In the Calvinistic scheme common grace does not and cannot lead to salvation. It functions to restrain evil in the world but does not lead unbelievers to faith. For Wesleyans, prevenient grace may lead one to salvation. Cox rightly says, ”The Wesleyan teaches that the prevenient grace leads on to saving grace, prepares for it, enables a person to enter into it.”[28]  Indeed, in Wesley’s theology it seems that a proper response to prevenient grace could lead to the salvation of those who have not heard the gospel.[29]  What we are interested in exploring, however, is not how prevenient grace affects those who have never heard the gospel. The distinctive aspect of prevenient grace that is relevant for our discussion is that it provides the ability to choose salvation, an ability that was surrendered by Adam’s sin. Wesley describes it as follows:

Salvation begins with what is usually termed (and very properly) preventing grace; including the first wish to please God, the first dawn of light concerning his will, and the first slight transient conviction of having sinned against him. All these imply some tendency toward life; some degree of salvation; the beginning of a deliverance from a blind, unfeeling heart, quite insensible of God and the things of God.[30]

What separates Calvinists from Wesleyans is that the former see electing grace as given only to some (the elect) and insist that this grace cannot ultimately be resisted. The latter argue that prevenient grace is given to all people and that it can be resisted.

What is common in all Wesleyan theories of prevenient grace is that the freedom, which was lost in Adam’s sin, is sufficiently restored to enable people to choose salvation.[31] Prevenient grace provides people with the ability to choose or reject God. As sinners born in Adam, they had no ability to do good or to choose what is right. But as recipients of prevenient grace they can once again choose the good. Wesley said, ”Natural free-will, in the present state of mankind, I do not understand: I only assert, that Rogers’s own conclusions regarding Wesley’s understanding of prevenient grace, on first glance, seem to be radically different from that suggested by the other scholars. Further analysis, however, reveals that the difference is one of degree, not one of kind. Rogers argues (Prevenient Grace, 217-19) that prevenient grace, according to Wesley, does not provide people with the ability to choose salvation. Prevenient grace in Wesley’s thought is a gift given, not a gift that is offered and can be rejected. People are passive m the reception of faith, and there is no emphasis on the role of human decision in receiving faith. Thus faith is irresistible at the moment given. Rogers’s explanation may lead one to think that Wesley was a Calvmist! But this is not the whole story. Rogers contends that prevenient grace (Prevenient Grace, 228-30, 237, 271, 282-83, 288) in Wesley’s thought plays a decisive role before one comes to faith. Prevenient grace operates through the law and conscience to bring conviction of sin and despair of ever pleasing God. People have the freedom to resist the conviction of sin that comes from the law and conscience. If they do not respond appropriately to the conviction of sin mediated by the law and conscience, then they will not be saved. Prevenient grace leads one to the very brink of salvation if one responds positively to the ”means of grace” that precede saving faith. Thus, prevenient grace is irresistible at the moment one exercises faith, but long before one receives faith the grace of God can be resisted. Only those who satisfactorily respond to prevenient grace come to the point where saving faith can be exercised. It seems that Rogers is in harmony with other Wesleyans in his conception of prevenient grace, for the grace God gives can still be resisted. Human beings may choose to respond to or resist the influence of the law and conscience. The final and ultimate determination lies with human choice. Rogers differs from other Wesleyans in locating the point of resistance in another place in Wesley’s theology, namely, one’s response to the means of grace before conversion.

For views that are quite similar to Rogers’s see Royster (Missiological Perspective, 90-91) and Robert E. Cushman, ”Salvation for All: Wesley and Calvinism,” in Methodism, ed. W. K. Anderson (Nashville: Methodist Publishing House, 1947). It is clear from Royster’s concluding definition that ability to choose what is good is included in his understanding of prevenient grace, for he says (92) that prevenient grace provides ”the freedom/power to respond positively to subsequent directions from God.” There is a measure of free-will supernaturally restored to every man, together with that supernatural light which ’enlightens every man that cometh into the world.’”[32]  Prevenient grace does not guarantee that the good will be chosen. It simply provides the opportunity or liberty to choose salvation. People may stifle the grace given and turn away from God, or they may respond to God’s grace and turn to him in order to be saved.

Obviously, prevenient grace fixes a large gulf between Calvinism and Wesleyanism. Calvinists contend that the unregenerate have no ability or desire to choose God. God’s election of some is what brings them from darkness to light, from Satan’s kingdom to God’s. Wesleyans believe that God has given prevenient grace to all people. As descendants of Adam they were born with no ability or desire to choose God, but God has counteracted this inability by the gift of prevenient grace. Now all people have the ability to choose God. The ultimate determination of salvation is the human decision to say no or yes to God.[33]