Is Prevenient Grace in the Bible? by Joseph M. Gleason 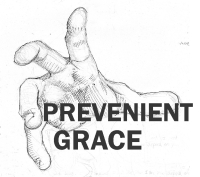 The doctrine of original sin leads to one of two conclusions: God’s Sovereignty in salvation, or an Arminian version of prevenient grace. Both Calvinists and Arminians say they believe in original sin. Adam was the father of the human race, and when he sinned, his sin was imputed to all of his children, including you and me. Adam died spiritually, and all humans ever since have come into the world dead in sin, with no righteousness whatsoever, and no thirst for God at all.

For Calvinists, the conclusion is simple. Before we can become believers, the heart of stone must be replaced with a heart of flesh (Ezekiel 36:28). Until God works regeneration in a person’s heart, faith in Christ for salvation is impossible (John 6:44). But after God regenerates the heart, a person will certainly come to Christ and be saved (John 6:37). Whether dead in sin or alive to Christ, we always choose according to our nature.

The Arminian doctrine of prevenient grace fits into their overall scheme of theology and enables them to maintain the doctrine of original sin and yet reject God’s Sovereignty in salvation, therefore rejecting unconditional election as well.

But the biggest problem with Arminian “prevenient grace” is that there is no clear Biblical support for it. Not once does Scripture speak of prevenient grace that “enables” salvation without also assuring salvation. The doctrine seems nice to Arminians, but can be found nowhere in the Bible.

One of the key reasons “prevenient grace” sounds so nice to people is because it implies God’s desire for *every* person to be saved. But does the Bible teach that this is really God’s desire? If we can clearly show from Scripture that God does *not* desire the salvation of all people, then we will have succeeded in greatly weakening the unbiblical doctrine of “prevenient grace”. First, let’s take a look in the book of Matthew:

And yet, what was God’s “response” to His foreknowledge about these people? Did He predestine them to salvation? Did He respond to foreseen faith by sending miracles so that they would repent and be saved? Not at all!

The doctrine of “prevenient grace” suggests that God really wants all people to receive salvation, and that He is really “doing all He can” to get the job done. Arminians suggest that God weeps over all lost souls, and that He sends His prevenient grace to all of them, just hoping that some of them will respond. But the God of the Bible is very different from this! Here we see in Matthew 11 that God *knew* what it would take for many people to repent and be saved, and nevertheless *withheld* it! That doesn’t sound like God is “doing all He can” to me. And it certainly doesn’t bode well for the man-centered doctrine of “prevenient grace”.

“Has the potter no right over the clay, to make out of the same lump one vessel for beauty and another for menial use?” (Romans 9:21)

Now let’s take a look a Christ’s reason for teaching in parables, and we will see a direct contradiction to “prevenient grace” in the Bible:

Mark 4:
[11] And he said unto them, Unto you it is given to know the mystery of the kingdom of God: but unto them that are without, all these things are done in parables:
[12] That seeing they may see, and not perceive; and hearing they may hear, and not understand; lest at any time they should be converted, and their sins should be forgiven them.

Note that this particular passage is talking about conversion, and the forgiveness of sins.

And note that Jesus does *not* want some people to be converted; He does not want them to have their sins forgiven. He forsees that they would have faith if they truly understood His message, but He explicitly says that He uses parables so that they will *not* understand Him. Again, God does not respond to foreknown faith by predestining them!

Notice that Mark 4:11-12 actually demonstrates the *opposite* of prevenient grace. This is more like an example of Divine “prevenient hardening”. Consider this comparison:

* Arminians think that God wants as many people to repent and be saved as possible, and that He gives all people “prevenient grace” to enable the salvation of all people.
* But Mark 4:11-12 teaches us that God knew about some people who *would* repent and be saved, and so Jesus spoke in parables to make sure that would not happen! Jesus refrained from speaking to them clearly, “lest at any time they should be converted, and their sins should be forgiven them.”

The above two statements are completely in opposition to one another. Arminian “prevenient grace” is a doctrine that directly contradicts the Scriptures.

In Matthew 11:21-27, we can see that God sometimes withholds things from people, even when He knows that those very things would have brought people to repentance. These actions of God do not sound at all like the actions of Someone who wishes to enable the salvation of everybody.

In Mark 4:11-12, we can see that Jesus intentionally spoke in parables, instead of plain language, so that many people would *not* understand, repent, and be forgiven. This is clearly the opposite of Arminian prevenient grace.

Multiple other passages could easily be brought to the table. But the two Scriptures above are quite effective, in that they offer evidence that directly opposes the idea of Arminian “prevenient grace”.

Arminians sometimes admit that there is not a passage anywhere in the Bible explicitly teaching prevenient grace. However, there is a small handful of passages which Arminians use, trying to support the idea of prevenient grace. For a sound critique of Arminian arguments for prevenient grace, I recommend Thomas Schreiner’s 18-page article entitled, “Does Scripture Teach Prevenient Grace in the Wesleyan Sense?”

This article makes up a chapter in the book, Still Sovereign, edited by Bruce A. Ware and Thomas R. Schreiner. His chapter in this book offers an excellent refutation of the Arminian “Prevenient Grace” doctrine.