A Brief History of Biblical Family Worship by Kerry Ptacek 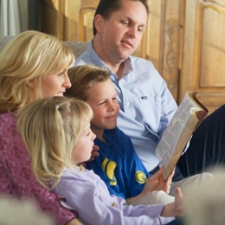 The distinctive elements of Biblical family worship, leadership by the male head of the family and the use of God’s word, are found throughout the Bible, in the ancient Church, and in those churches which prepared and continue the Reformation to this day.

The law required that the father answer questions posed by his children on the meaning of the Passover, the firstborn and the covenant (Ex 12:1-28; 13:1-16). The responsibility of men to teach their families God’s words generally also was affirmed: ‘You shall teach them diligently to your children, and shall talk of them when you sit in your house, when you walk by the way, when you lie down, and when you rise up’ (Dt 6:6-7; 11:18-19).

This spiritual role for fathers was understood in the time of David. Asaph wrote of ‘sayings of old, which we have heard and known, and our fathers have told us’ and promised: ‘We will not hide them from their children, telling the generation to come the praises of the LORD, and His strength and His wonderful works that He has done. For He established a testimony in Jacob, and appointed a law in Israel, which He commanded our fathers, that they should make them known to their children’ (Ps 78:1-6).

The spiritual leadership of the male family head continues in the New Testament. The husband was to model the love of Christ in washing his wife ‘by the word’ (Eph 5:26). So, too, the fathers were commanded to ‘bring up your children in the training and admonition of the Lord’ (Eph 6:4).

Ignatius, who as a boy in Antioch saw Paul, said fathers should teach their children the Bible. His contemporary, Clement of Rome (30-100) reminded the Corinthians to teach their wives the Bible. Clement of Alexandria (153-217) preached that the husband and wife should practice united prayer and Scripture reading every morning. The North African elder Tertullian (142-220), in a book dedicated to his wife, spoke of the spiritual unity of Christian marriage through prayer, the word of God, and singing.

John Chrysostom (347-407), Bishop of Constantinople, witnesses to the continuation of the Biblical view in urging that every house should be a church, and every head of a family a spiritual shepherd. However, in the western church married men gradually were removed from church leadership by canon law. Celibate clergy supplanted the father’s role as a spiritual leader.

Through Waldensian Bible distribution and later the invention of the printing press, Biblical family worship is reported again in European homes before the Reformation. Handbooks for fathers and manuals for catechizing in the home were produced. The earliest Protestant confession, the Bohemian, included such a manual.

The revival of family worship became part of the Reformation’s agenda of restoring the life of the church on a Biblical basis. The practice especially was developed among British Puritans and Presbyterians. Thomas Becon (1512-1567), Thomas Cranmer’s chaplain, said through a son being catechized by his father: ‘Every man is a bishop in his own house. Who seeth not then that the householder is bound to teach his household, the chief member whereof the wife is, and therefore necessarily to be instructed and taught of her husband?’ In 1557 John Knox wrote to his congregation as he went into exile: ‘you are bishops and kings; your wife, children, servants, and family are your bishopric and charge. Of you it shall be required how carefully and diligently you have instructed them in God’s true knowledge… And therefore I say, you must make them partakers in reading, exhorting, and in making common prayers, which I would in every house were used once a day at least.’

This emphasis was carried to America. The first settlers of Salem entered into a covenant in 1629 “Promising also unto our best ability to teach our children and servants the knowledge of God, and of His Will, that they may serve Him also.” Cotton Mather recounts many examples of prominent New Englanders leading their households in family worship. With the rise of Christian state education, family worship began to decline in New England at the end of the 17th century.

In the Westminster Confession of Faith daily family worship is taken for granted (XXI.VI). Thomas Manton’s preface to the Confession spoke entirely of its use by heads of families in the home. However, only a Directory for Public Worship was adopted by the Assembly. The Church of Scotland fulfilled the Assembly’s intent in adopting a Directory for Family Worship in 1647.

English Puritanism after Westminster continued to emphasize the distinctive features of Biblical spiritual leadership in the home. Richard Baxter stated that ‘The husband must be the principal teacher of the family. He must instruct them, and examine them, and rule them about matters of God.’ Three decades later, Matthew Henry preached in his 1704 sermon ‘On Family Religion’ that ‘Masters of families, who preside in the other affairs of the house, must go before their households in the things of God. They must be as prophets, priests, and kings in their own families; and as such they must keep up family-doctrine, family-worship, and family-discipline…’

American Presbyterianism was shaped by The Directory for Family Worship, which stated that family worship was necessary so that ‘the power and practice of godliness, amongst all ministers and members of this kirk, according to their several places and vocations, may be cherished and advanced.’ In 1733 the Synod of Philadelphia, in seeking ‘some proper means to revive the declining Power of Godliness,’ recommended ‘to all our ministers and members to take particular Care about visiting families, and press family and secret worship, according to the [W]estminster Directory.’

During the Great Awakening George Whitefield preached that ‘we must forever despair of seeing a primitive spirit of piety revived in the world until we are so happy as to see a revival of primitive family religion.’ He reiterated that ‘every governor of a family… [is] bound to instruct those under his charge in the knowledge of the Word of God.’ Jonathan Edwards (1703-58) stated in his ‘Farewell Sermon’ that ‘family education and order are some of the chief means of grace. If these fail, all other means are likely to prove ineffectual.’

After Independence from Great Britain, all American Presbyterians adopted some form of The Directory for Family Worship. Many Presbyterians shared the view in the Associate Reformed Presbyterian Christian Magazine of the South, in 1845 that ‘Family Worship is one of [the] singular actions of God’s people. We do not look for this, we do not expect it, from those ‘who are the enemies of the cross of Christ.” Failure to carry out family worship was treated as a matter of church discipline: ‘by no means to admit either to the table of the Lord, or to baptism for their children, any by whom it is habitually neglected.’

Family worship began to decline even among Presbyterians from the middle of the 19th century with the rise of Sunday school. Nevertheless, at the beginning of this century the Southern Presbyterian General Assembly still affirmed that ‘God requires in the home daily instruction of the children in the Scriptures and the training of the children in all forms of Christian service. God lays on the man, as the head of the family, the chief responsibility for the performance of these requirements… and will not sanction the delegation of this responsibility to the wife, the Sabbath school, or to any other agency.’

Family worship continued to be spoken of and advocated in some Presbyterian denominations and groups such as the Family Altar League down to the middle decades of this century. From the late 1980s a revived interest in Puritanism and concern about the spiritual condition of Christian families have combined in a renewed interest in Biblical family worship. Whether it is the Lord’s will that this be a time of Reformation, remains to be seen.

This is a slightly edited version of an article which appeared in the November 1997 issue of Ligonier Ministries’ Table Talk. Many of the documents cited may be found at the Covenant Family Fellowship homepage.

Resources on Parenting and Family Worship

Don’t Make Me Count to Three

One Year of Dinner Table Devotions and Discussion Starters

The Case for Family Worship

Disciplines for a Godly Family

A Neglected Grace: Family Worship in the Christian Home