The Great Tribulation: Past or Future? 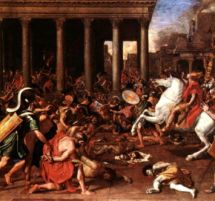 “Although this entire present age intervening between the first and second comings of Christ is one of tribulation, trial and distress, the so-called Great Tribulation mentioned in Mat. 24:21 (and described in vv. 15-28; and perhaps also in vv. 29-31) has already come and gone. It is to be identified with the siege on Jerusalem during the years 66-70 a.d., which culminated in the destruction of the city and its Temple by the armies of Rome (the latter being the “abomination of desolation” referred to in v. 15). Thus “The Great Tribulation” of Mt. 24:21 (called “days of vengeance” in Lk. 21:22 and “days of affliction” in Mk. 13:19) is not a future event but an established fact of past history.” ~ Sam Storms