Give us Men! by Josiah Gilbert Holland 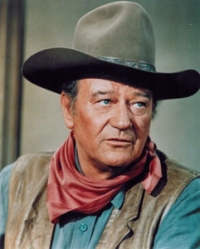 Without a doubt this is one of my favorite poems. Often when we think of “manhood” or what it means to be a “real man” we have images of John Wayne or some rough and tough hero type from the movies.  And though there are a lot of admirable traits in these figures – heroism, courage, boldness, etc. – they really fall short of the picture of biblical manhood.

Though no poem or book can perfectly capture every aspect of what God calls us to as men, I have read this to my boys on numerous occasions and impressed upon them the virtues and ideals embodied in this short work.  This is a poem to read and reread. And it’s worthy to have your boys memorize.  I hope you enjoy it as much as I have!

Give us Men!
Men who, when the tempest gathers,
Grasp the standard of their fathers
In the thickest fight;
Men who strike for home and altar,
(Let the coward cringe and falter),
God defend the right!
True as truth the lorn and lonely,
Tender, as the brave are only,
Men who treat where saints have trod,
Men for Country, Home- and God:
Give us Men! I say again- again-
Give us Men!