Are you a Shorter Catechism Man? 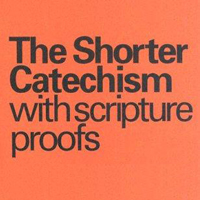 I read this today on my daughter’s Facebook page. I have no idea where it came from, but it’s excellent:

“…in a city of intense excitement of violent rioting and the streets were overran daily by a dangerous crowd, then one day he observed approaching him a man of a singular combined firmness of character; whose very demeanor inspired in him a measure of confidence. And so impressed was he with his baring amid thee surrounding up-roar all around him, but when he had passed, he turned to look back at him only to find that the stranger had done the same. On observing his turning, the stranger at once came back to him; and touching his chest with his forefinger, demanded without preface, “What is the chief end of man?” And one, receiving then immediately the countersign, “Man’s chief end is to glorify God, and enjoy him for ever!” “Ah,” he said, “I knew you were a shorter catechism man by your very looks!” “Why,” said the man, “that is just what I thought about you!”

Are you a Shorter Catechism Man?