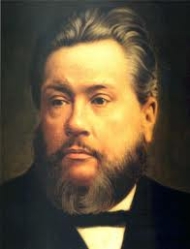 “The doctrine of justification itself, as preached by an Arminian, is nothing but the doctrine of salvation by works…” — C.H. Spurgeon

Praised by many evangelicals as a great preacher, Charles H. Spurgeon is considered a successful and “safe” example of a “non-theological” ministry. His works are recommended as a means to lead many aspiring pastors into developing their own successful ministries. His Lectures to My Students are often used for this purpose, emphasizing the “practical” aspects of evangelism. But while the form of Spurgeon’s successful preaching is often studied by would-be pastors, the content of this Christian giant’s preaching and teaching is often ignored. Rather Spurgeon is popularly thought to have heartily approved of the same theology that is presently dominating American culture: Arminianism.

Many Christian leaders, for instance, like to point out Spurgeon as one who also had no formal college training. They ignore the fact that he had a personal library containing more that 10,000 books.1 It is further argued that the success of his ministry in the mid-to-late 19th century was due to his anti-intellectual piety, “his yieldedness to the Spirit,” and his Arminianism. The fact is, Spurgeon was not anti-intellectual, nor did he entertain delusions of being so holy that he could allow God to work only if he was “yielded.” Most importantly, he was not an Arminian. He was a staunch Calvinist who opposed the dominant religious view of his day (and of ours), Arminianism.2 Even toward the end of his life he could write, “From this doctrine I have not departed to this day.” 3 He was grateful that he never wavered from his Calvinism.4 “There is no soul living who holds more firmly to the doctrine of grace than do I…”5 Reading Spurgeon’s beliefs, one will see that this tremendously fruitful ministry was built upon the preaching of the biblical gospel.

In his work, “A Defence of Calvinism,” he states unequivocally: [T]here is no such thing as preaching Christ and Him crucified, unless we preach what nowadays is called Calvinism. It is a nickname to call it Calvinism; Calvinism is the gospel, and nothing else. I do not believe we can preach the gospel, if we do not preach justification by faith, without works; nor unless we preach the sovereignty of God in His dispensation of grace; nor unless we exalt the electing, unchangeable, eternal, immutable, conquering love of Jehovah; nor do I think we can preach the gospel, unless we base it upon the special and particular redemption of His elect and chosen people which Christ wrought out upon the cross; nor can I comprehend a gospel which lets saints fall away after they are called, and suffers the children of God to be burned in the fires of damnation

Here Spurgeon affirms his agreement with what are usually called “The Five Points of Calvinism.” Spurgeon’s own summation was much shorter: A Calvinist believes that salvation is of the Lord.7 Selections from his sermons and writings on these subjects make his position clear.

Regarding Total Depravity and Irresistible Grace:

When you say, “Can God make me become a Christian?” I tell you yes, for herein rests the power of the gospel. It does not ask your consent; but it gets it. It does not say, “Will you have it?” but it makes you willing in the day of God’s power….The gospel wants not your consent, it gets it. It knocks the enmity out of your heart. You say, I do not want to be saved; Christ says you shall be. He makes our will turn round, and then you cry,”‘Lord save, or I perish!”8

I do not hesitate to say, that next to the doctrine of the crucifixion and the resurrection of our blessed Lord–no doctrine had such prominence in the early Christian Church as the doctrine of the election of grace.9 And when confronted with the discomfort this doctrine would bring, he responded with little sympathy: “‘I do not like it [divine election],’ saith one. Well, I thought you would not; whoever dreamed you would?”10

[I]f it was Christ’s intention to save all men, how deplorably has he been disappointed, for we have His own testimony that there is a lake which burneth with fire and brimstone, and into that pit of woe have been cast some of the very persons who, according to the theory of universal redemption, were bought with His blood.11

He has punished Christ, why should He punish twice for one offence? Christ has died for all His people’s sins, and if thou art in the covenant, thou art one of Christ’s people. Damned thou canst not be. Suffer for thy sins thou canst not. Until God can be unjust, and demand two payments for one debt, He cannot destroy the soul for whom Jesus died.12

Regarding the Perseverance of the Saints:

I do not know how some people, who believe that a Christian can fall from grace, manage to be happy. It must be a very commendable thing in them to be able to get through a day without despair. If I did not believe in the doctrine of the final perseverance of the saints, I think I should be of all men most miserable, because I should lack any ground of comfort.13

The selections above indicate that C. H. Spurgeon was without a doubt an affirmed, self-professing Calvinist who made his ministry’s success dependent upon truth, unwilling to consider the “Five Points of Calvinism” as separate, sterile categories to be memorized and believed in isolation from each other or Scripture. He often blended the truths represented by the Five Points, because they actually are mutually supportive parts of a whole, and not five little sections of faith added to one’s collection of Christian beliefs. Spurgeon never presented them as independent oddities to be believed as the sum of Christianity. Rather, he preached a positive gospel, ever mindful that these beliefs were only part of the whole counsel of God and not the sum total. These points were helpful, defensive summaries, but they did not take the place of the vast theater of redemption within which God’s complete and eternal plan was worked out in the Old and New Testaments.

Certain that the Cross was an offense and stumbling block, Spurgeon was unwilling to make the gospel more acceptable to the lost. “The old truth that Calvin preached, that Augustine preached, is the truth that I must preach today, or else be false to my conscience and to God. I cannot shape the truth; I know of no such thing as paring off the rough edges of a doctrine.”14 Elsewhere he challenged “I cannot find in Scripture any other doctrine than this. It is the essence of the Bible….Tell me anything contrary to this truth, and it will be heresy…”15 Spurgeon believed that the price of ridicule and rejection was not counted so high that he should refuse to preach this gospel: “[W]e are reckoned the scum of creation; scarcely a minister looks on us or speaks favorable of us, because we hold strong vies upon the divine sovereignty of God, and his divine electings and special love towards His own people.”16

Then, as now, the dominant objection to such preaching was that it would lead to licentious living. Since Christ “did it all,” there was no need for them to obey the commands of Scripture. Aside from the fact that we should not let sinful people decide what kind of gospel we will preach, Spurgeon had his own rebuttals to this confusion:

[I]t is often said that the doctrines we believe have a tendency to lead us to sin….I ask the man who dares to say that Calvinism is a licentious religion, what he thinks of the character of Augustine, or Calvin, or Whitefield, who in successive ages were the great exponents of the systems of grace; or what will he say of the Puritans, whose works are full of them? Had a man been an Arminian in those days, he would have been accounted the vilest heretic breathing, but now we are looked upon as the heretics, and they as orthodox. We have gone back to the old school; we can trace our descent from the apostles….We can run a golden line up to Jesus Christ Himself, through a holy succession of mighty fathers, who all held these glorious truths; and we can ask concerning them, “Where will you find holier and better men in the world?”17

His attitude toward those who would distort the gospel for their own ideas of “holiness” is clear from the following: No doctrine is so calculated to preserve a man from sin as the doctrine of the grace of God. Those who have called it ‘a licentious doctrine’ did not know anything at all about it. Poor ignorant things, they little knew that their own vile stuff was the most licentious doctrine under Heaven.18

A status before God based upon how we “use” Christ and the Spirit to feign righteousness was a legalism hated by Spurgeon. As in our day, Spurgeon saw that one of the strongholds of Arminianism included the independent churches.21 Arminianism was a natural, God-rejecting, self-exalting religion and heresy.22 As Spurgeon believed, we are born Arminians by nature.23 He saw this natural aversion to God as encouraged by believing self-centered, self-exalting fancies. “If you believe that everything turns upon the free-will of man, you will naturally have man as its principal figure in your landscape.”24 And again he affirms the remedy for this confusion to be true doctrine. “I believe that very much of current Arminianism is simply ignorance of gospel doctrine.”25 Further, “I do not serve the god of the Arminians at all; I have nothing to do with him, and I do not bow down before the Baal they have set up; he is not my God, nor shall he ever be; I fear him not, nor tremble at his presence…The God that saith today and denieth tomorrow, that justifieth today and condemns the next…is no relation to my God in the least degree. He may be a relation of Ashtaroth or Baal, but Jehovah never was or can be his name.”26 Refusing to compromise the gospel in any way, he soundly refuted and rejected common attempts to unite Calvinism and Arminianism into a synthesized belief. Nor would he downplay the importance of the differences between the two systems:

This may seem to you to be of little consequence, but it really is a matter of life and death. I would plead with every Christian–think it over, my dear brother. When some of us preach Calvinism, and some Arminianism, we cannot both be right; it is of not use trying to think we can be–‘Yes,’ and ‘no,’ cannot both be true.Truth does not vacillate like the pendulum which shakes backwards and forwards….One must be right; the other wrong.27