If You Can Only Read One of John Stott’s Books 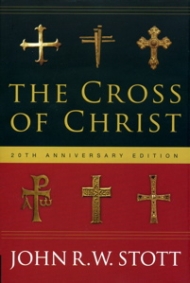 The book is The Cross of Christ.

John R. W. Stott is known worldwide as a preacher, evangelist and communicator of Scripture. For many years he served as rector of All Souls Church in London, where he carried out an effective urban pastoral ministry. A leader among evangelicals in Britain, the United States and around the world, Stott was a principal framer of the landmark Lausanne Covenant (1974) . . . A hallmark of Stott’s ministry has been expository preaching that addresses the hearts and minds of contemporary men and women. Stott was honored by Time magazine in 2005 as one of the “100 Most Influential People in the World.”

Everyone is familiar with Stott’s work, Basic Christianity. But the most famous and most recommended work, of all of John Stott’s books, is The Cross of Christ. As Justin Taylor said, “Endorsers can sometimes sound a bit hyperbolic, but you can tell from the commendations below for The Cross of Christ that there is an earnestness and realism about the message and the ministry of this masterpiece.”

What People Say about The Cross of Christ

“John Stott rises grandly to the challenge of the greatest of all themes. All the qualities that we expect of him—biblical precision, thoughtfulness and thoroughness, order and method, moral alertness and the measured tread, balanced judgment and practical passion—are here in fullest evidence. This, more than any book he has written, is his masterpiece.” ~  J.I. Packer, Regent College

“Rarely does a volume of theology combine six cardinal virtues, but John Stott’s The Cross of Christ does so magnificently. It says what must be said about the cross; it gently but firmly warns against what must not be said; it grounds its judgments in biblical texts, again and again; it hierarchizes its arguments so that the main thing is always the main thing; it is written with admirable clarity; and it is so cast as to elicit genuine worship and thankfulness from any thoughtful reader. There are not many ‘must read’ books—books that belong on every minister’s shelf, and on the shelves of thoughtful laypersons who want a better grasp of what is central in Scripture—but this is one of them.” ~ D. A. Carson, Trinity Evangelical Divinity School

“As relevant today as when it first appeared, The Cross of Christ is more than a classic. It restates in our own time the heart of the Christian message. Like John the Baptist, John Stott points us away from the distractions that occupy so much of our energies in order, announcing, ‘Behold, the Lamb of God who takes away the sin of the world!’” ~ Michael Horton, Westminster Seminary California